Regular readers of my blog will know that we love watching the birds that visit our garden.  We put out food for them, especially in the cold weather and the nesting season.

Early this morning, Mr LizzieMade put out some mealworms (dried… I can’t quite cope with wiggly live ones!).  A group of birds came down to feed, bringing their fledged chicks with them.  Dave noticed a nice little grey-white collared dove baby – he’d never seen a baby collared dove before, so he stopped at the kitchen window for a closer look.

Only, it wasn’t a baby collared dove at all…. 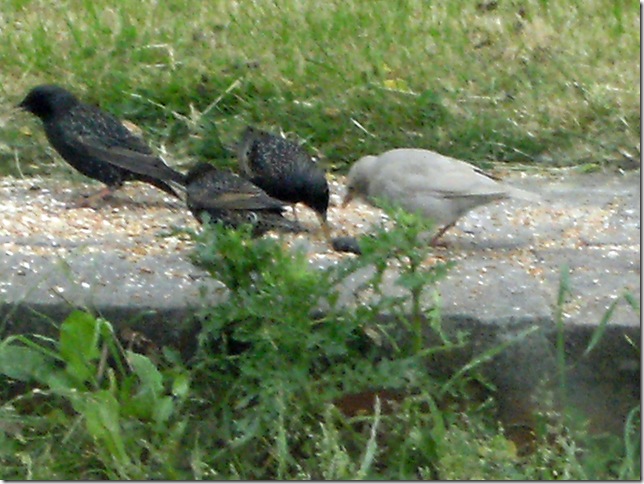 An albino…maybe, we’re not sure – it doesn’t look quite white and I think it may still have dark eyes – so it’s just a pigment abnormality, rather than albinism.  Still, it’s very rare and a bit exciting. 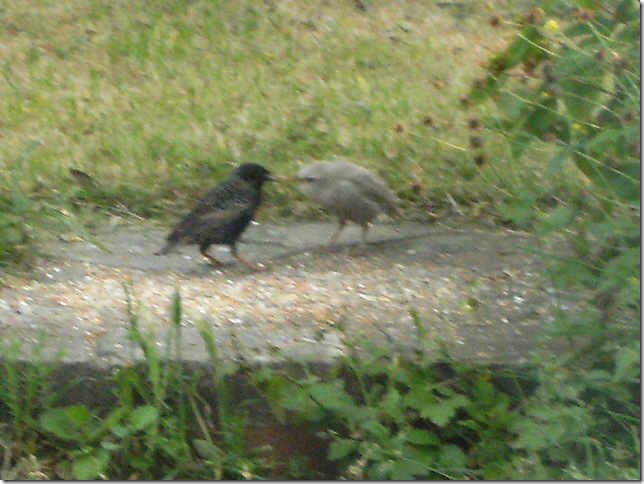 Not a great photo, but here’s one of the adult birds, feeding white-baby with mealworms and seeds.

We’re not sure what his chances are, of surviving very long.  He’s obviously at a disadvantage, as he doesn’t have the camouflage that his friends and family have.  On the other hand, he seems to be fit and healthy and starlings look after each other.  Maybe he stands a good chance of a long life – and perhaps we’ll see him in the garden regularly.

They flew away just after I took these photos, so I was grateful to Dave, for waking me early, so I could see them.  I had to share with you all – such a rare event is really too good not to share!
Posted by Lizzie at 10:19 pm 8 comments: Links to this post 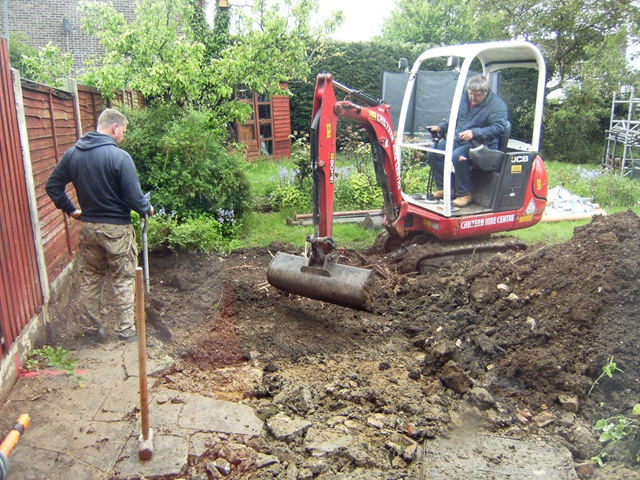 You’ve probably read in one of my recent posts, that we are making some alterations to our house.  We’re building an extension to the rear and making some changes to the inside layout, to add a “real” hallway beside the stairs, with access doors to both main rooms, rather than having to walk through the sitting room to reach the dining room, then through the dining room to get to the kitchen!

So, the Builders are here.  They’ve been on-site most days for the past two weeks or so and they have set up a little space in the garage, where there’s a work-bench.  Of course, there is also a radio; no builder can work without the radio on all day (Jeff – the boss – says it’s a security measure, as it makes would-be nosey-parkers believe someone is there, even if everyone is round the back digging holes).

The radio is set to a local “hits” channel, which plays mainly 1980’s and 1990’s music, with the odd gem from the ‘70’s etc.  Builders seem to like that kind of music best.  I suppose most of it is cheerful, with a good beat and a tune (some “music” isn’t really so musical is it…).
I could produce a CD of “Builders’ Greatest Hits”, as they sing (or howl) along to their favourites – which they then repeat at intervals throughout the day, making up their own version when they forget the words or tune…

Classics such as “Layla”, “Tainted Love”, “I Knew You Were Waiting…”, “Baby, Where Did Our Love Go?” etc, etc all become part of the day’s sound-track.  They make silly faces, as they croon a love song to one another.  Their sentences are punctuated by snatches of song.

It’s quite fun really. They also have a kind-of scripted banter, which they carry on at intervals, in between the chat and even some serious conversation about wives and girlfriends, their children, family and friends, what they watched on tv, the state of the economy… They can be quite serious and thoughtful, these builder-chaps; they may have a mainly manual kind of job, but that doesn’t stop them using their brains too.

They also have some standing jokes, which get trotted out daily:

So I asked if they don’t get bored of that joke.  Apparently they don’t – it seems to be part of the routine; perhaps it’s the oil that keeps them all running smoothly.

My favourite though, has to be a conversation I overheard on Monday, while I was working up in the studio.   It gets warm in there, as the room faces south, so I have to open the window.  The builders were working in the hallway, with the front door open, just below where I was:

“You know that woman we saw walking by this morning?”

“What, that really good-looking one?”

“She was alright… bit of a smasher…” (can’t remember exact words, but that was the general idea… quite polite, but obviously they had noticed!).

Curly – “But Jeff, you was going to ask for her phone number!”

Really, you just couldn’t make these things up…

And I get this free floor-show every day.  It’s almost worth the dust and hassle, just to have a good laugh.
Posted by Lizzie at 4:09 pm 15 comments: Links to this post