Thanks to Stacey and Heather for their suggestion to solve my Blogger editing problems – I am trying Windows Live Writer to produce this post.  Let’s see how I get on…

Firstly, if you're looking for the post about the Celebrating Blog Friendships Blog Party on 6th November, see this post.


Also Jo has published an update post today, with a final checklist of those who said they'd like to join in.  Please check her post here, to make sure your name is on the list!

So, the mini-holiday in London… (this post has a fair bit of writing and lots of pictures – you may wish to go now and get a cuppa & a biccie!)

(and a night-time adventure!)

We had a strange night.  The bathrooms were right across the hall from our room, which made it a bit noisy, as families got their children settled for the night.
Also, the room was a bit warm, so we had to open the window – then there were the usual Saturday night noises to get used to, not to mention the striking of the St. Paul’s bells, on every quarter-hour and the big, “Great Tom” bell booming the time on each full hour.  That was nice, but took a bit of getting used to!
Once everyone had settled down, it was about 10:30pm and I started to drift off…
At around 11pm, a group of students came in and started going into the bathrooms.  Doors creaking and banging, voices, sounds of teeth-cleaning (they left the doors open so they could chat!)… I thought it would settle down soon, but it went on, and on, and on.  The chatting became louder, then there were sounds of thumping, zips and velcro, more chatting… then a man’s voice. I thought it must be the dad from the family room next door, asking them to be quiet – it was after 11:30 by now – but it went on still.
Eventually, after the Clock struck midnight, I went out to see what was going on – by now DS was also awake and I didn’t want him up all night.
An interesting sight… Our room was by a fire door, which led to a sort-of cul-de-sac, with two bedrooms and a shower room.  There was a group of about ten or twelve students – mainly girls – sitting around the edges of the cul-de-sac, leaning on the open fire-door, all the way up to our bedroom door.  They were in their sleeping bags, with their rucsacs on the floor next to them.  They seemed to be camping (!?) and showed no sign of preparing to go to bed.
So I had to ask them to please either go down to the lounge and chat there, or to go to bed and sleep.  I was nice, but pointed out there were family rooms next to them, that they had woken us and probably the family next to us and that there were children in these rooms, trying to sleep.  They did look sheepish and apologised, then I heard them all going into rooms, or downstairs – whatever.  Peace at last! But how weird…
So we were a bit sleepy in the morning, but at least we managed 7 hours or so (and DS went straight back to sleep, so he had about 9 hours).  Warm showers woke us up okay and we were hungry enough to forget about bed. 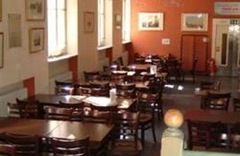 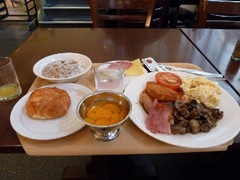 Breakfast photo from tripadvisor.co.uk
We went and ate breakfast.  The breakfasts in the hostel were pretty okay. Lots of choice – cereals, yoghurt, ham, cheese, croissants and chocolatines, toast, fresh fruit, hot food – bacon, eggs, sausages, grilled tomato, baked beans, mushrooms… nicely cooked too, choice of fruit juices and also hot chocolate, tea and coffee.
Some girls at our table arrived with trays piled high. I thought they must be good eaters… but they used the toast, cheese and ham to make sandwiches for their lunches!  They wrapped them in napkins and had an apple each too – definitely a clever money-saver for students travelling in London!
So, we were ready to go OUT on a sunny October Sunday morning… 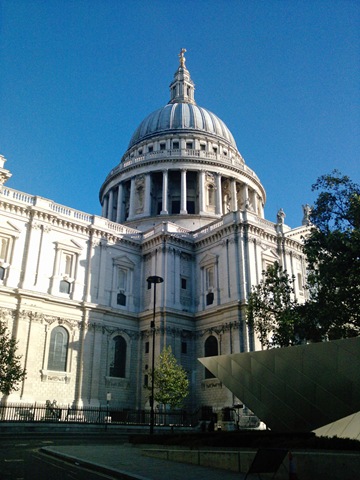 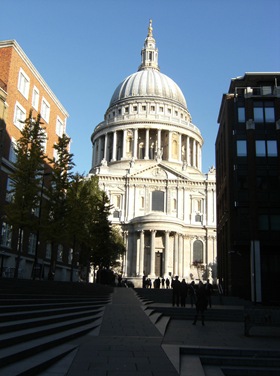 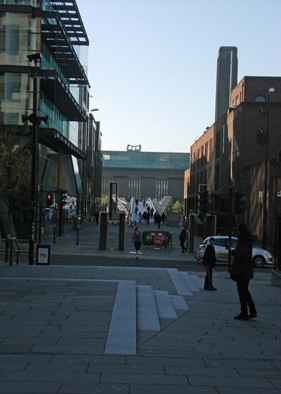 …from St. Peter’s Hill, down to the Millenium Bridge and the River Thames. 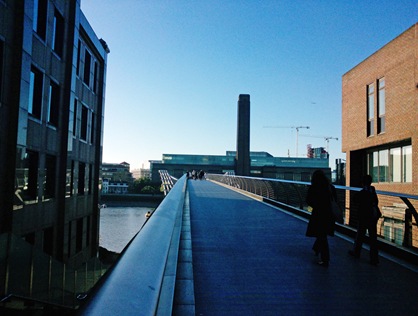 Walking across the Millenium Bridge in the early morning 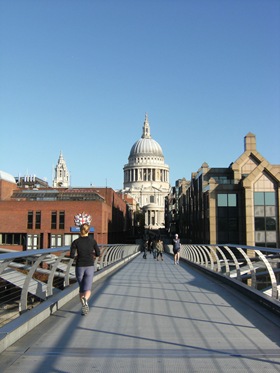 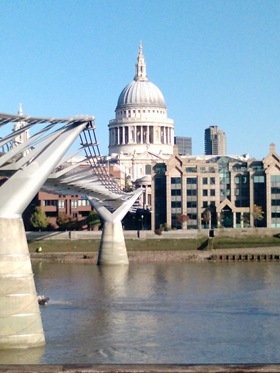 Millenium Bridge views to St. Paul’s
We crossed the bridge to the South Bank, because we wanted to catch a river ferry from the pier at Bankside. 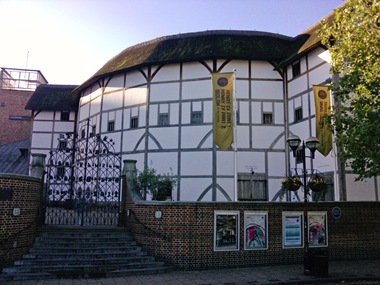 The replica Globe Theatre on the South Bank.  We planned on going there on Tuesday, for a tour. 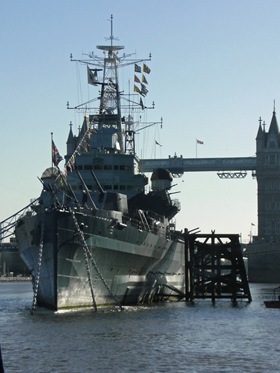 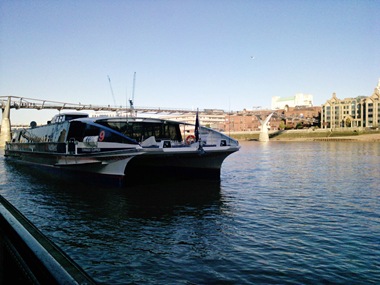 Our Thames Clipper ferry, arriving at Bankside Pier. We went down the Thames to Greenwich. 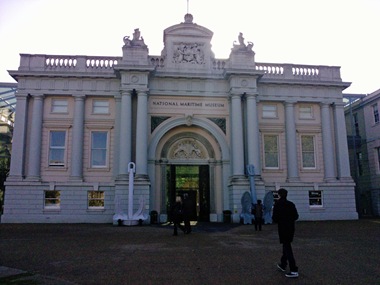 National Maritime Museum – We spent a couple of hours here, exploring lots of interesting Maritime history.  There was an exhibition of Toy Boats as well, which was fun.  Lunch in the cafe, then a stroll to Greenwich Park. 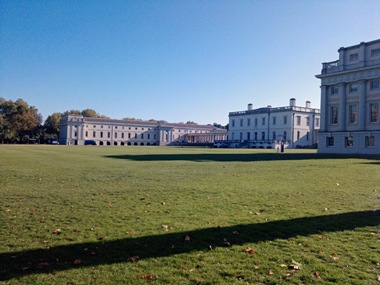 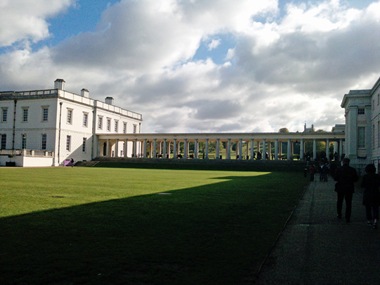 Colonnade between Old Royal Naval College and the Queens House 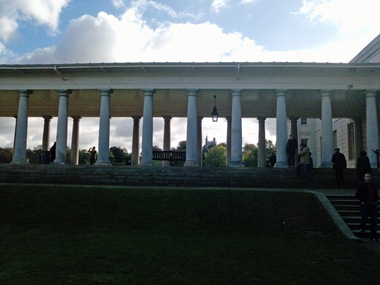 I can imaging ladies and gentlemen from long ago, strolling under the shelter of the colonnade, looking across Greenwich Park… 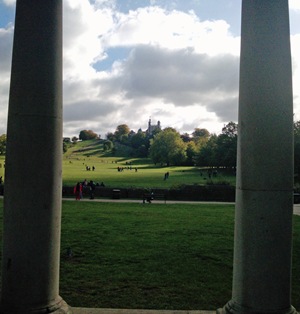 … there’s certainly a great view from here!  View across Greenwich Park, to the Royal Observatory 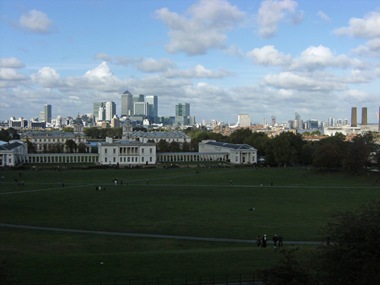 From the Observatory hill, across Greenwich Park, to the Queen’s House and Maritime Museum.  In the background, Canary Wharf – see the tower with the pyramid roof – the Isle of Dogs and other buildings along the North bank of the Thames. 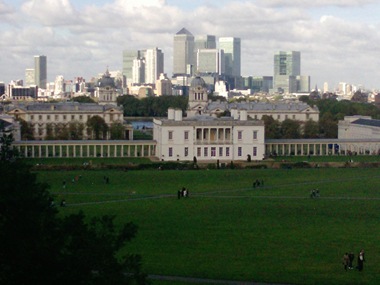 What a contrast, between the old and new! 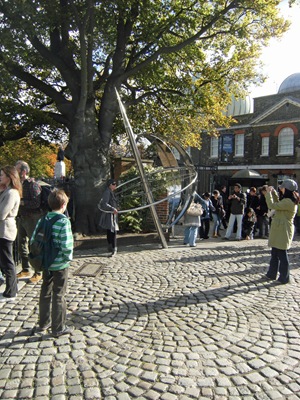 The site of the Prime Meridian, Greenwich – designated as the point of 0 degrees Longitude and the home of Greenwich Mean Time (which, incidentally, Britain reverts to tonight as British Summertime ends for the winter). 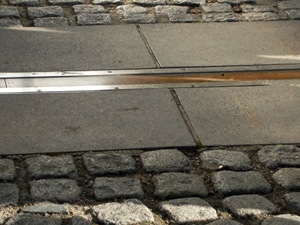 The famous Meridian Line.  There was such a queue to stand on this and have your picture taken… we didn’t bother. 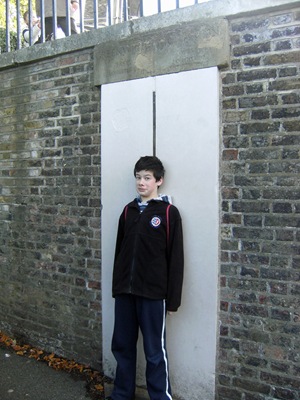 Instead, J stood on the Old Meridian Line, just below the courtyard of the Observatory… Standing in two Hemispheres at a time!  That stone above his head has an inscription describing the Meridian. 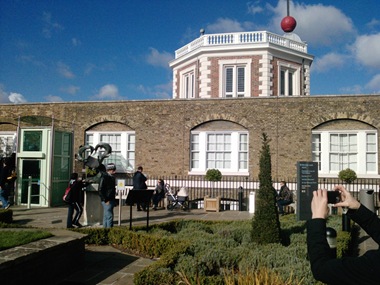 The Greenwich Royal Observatory.  This is the rather nice garden.  We went into the Camera Obscura, in a little house to the side, where we could see Greenwich Park and the Maritime Museum reflected in real-time, on a white curved table – little people and their dogs walking along, children running, pushchairs and skateboards…  All good fun. 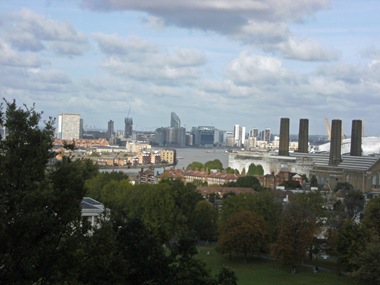 From the Observatory, the views across the Park and up the Thames are even better.  The highest point for miles (which is why the Royal Observatory was sited here, of course!).

After looking round the Observatory a bit, we headed for the Planetarium.  This building has replaced the old London Planetarium, which now belongs to Madame Tussauds and has shows about a different sort of “star”! 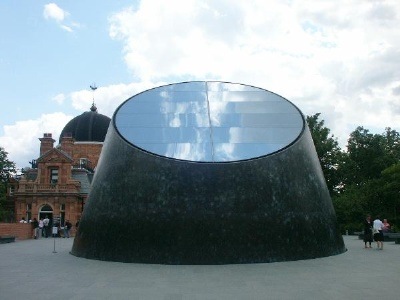 Photo from waymarking,com
We had tickets for one of their shows and spent half an hour drifting around the Galaxy, learning about other planets in our Solar System.  It’s quite exciting actually and they have a brilliant system, which projects amazing images of the sky, photographs of the planets, star maps etc, all onto their curved ceiling, which you view from a comfy seat that is conveniently tipped back slightly, so you don’t have to crane your kneck (v. good for me, who can’t tip my head back!)
We headed back to Greenwich Pier about 5pm and caught another Thames Clipper back to Bankside.
Dinner at Pizza Express, just across the road from St. Paul’s Cathedral.  We’re spoilt rotten!
We slept like babies!
Posted by Lizzie at 10:16 pm

I love to read your comments!