For the last few years, Rinda, of Gallo Organico, has hosted a Photo Scavenger Hunt.  I have tried to join in, but somehow Life has always taken over and my collection of photos has been pathetic.

This year I have had more success! Here are the photos I have managed to collect for the Challenge:


1. A sign welcoming people to your home town (or a nearby town)
* Oh dear... there's one just up the road - I just forgot to photograph it!  Not the best start... 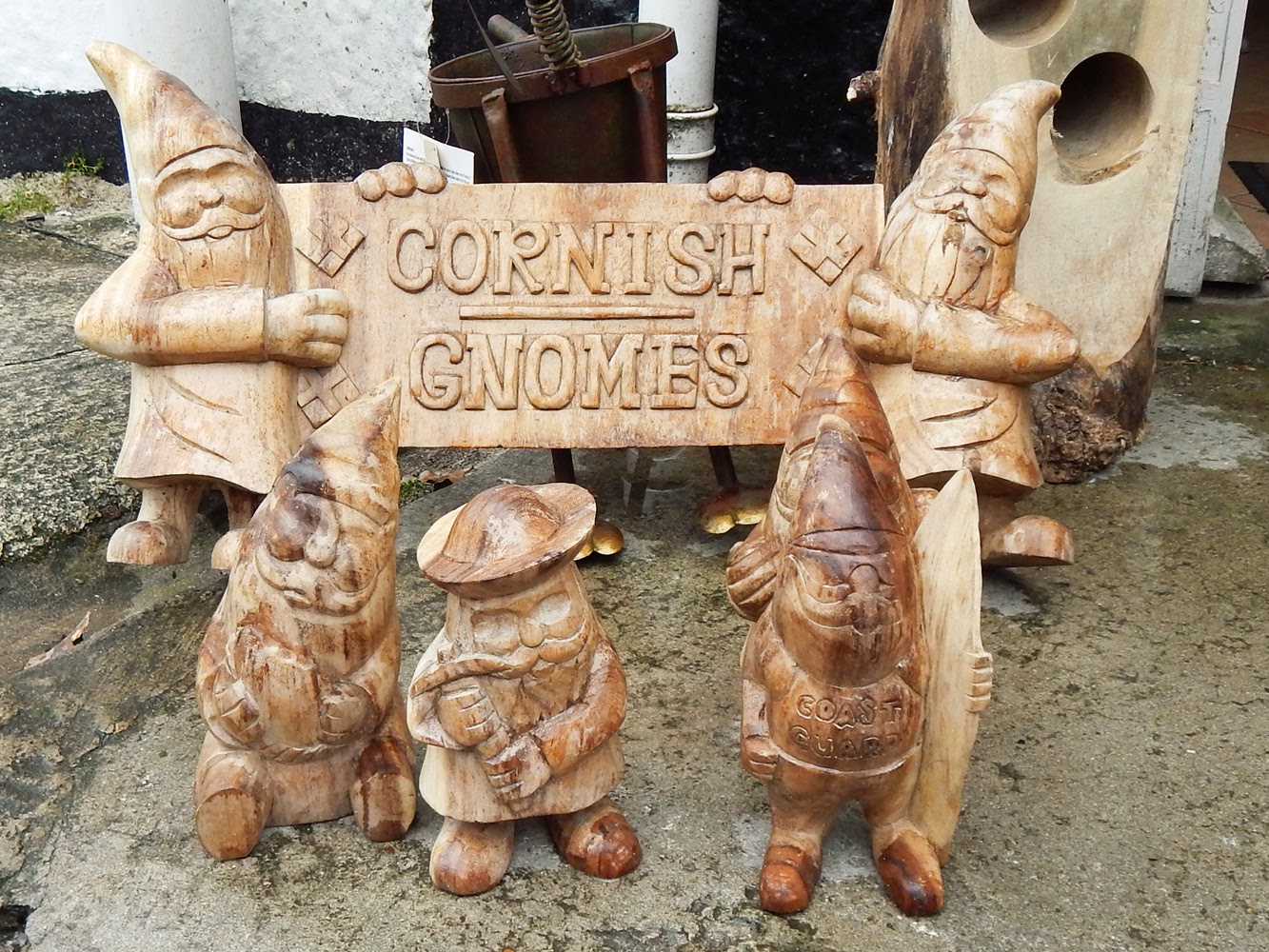 We had a week away in Cornwall, at the start of July.  I couldn't resist these lovely Gnomes that I found outside a great little shop in St. Ives - one even has a surfboard! 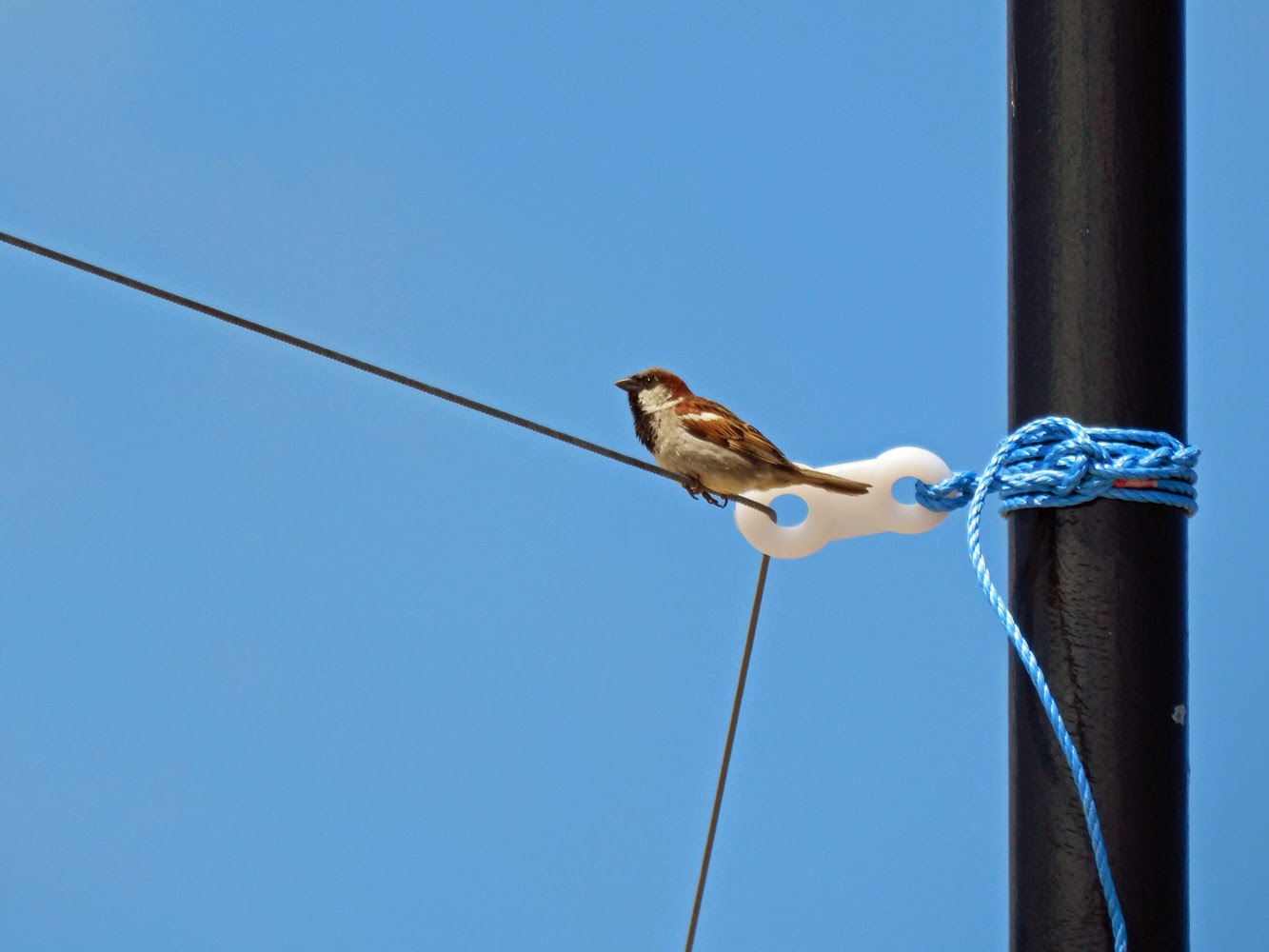 Alright, I admit it is Bird (singular) on a Wire... but he was just so cute!  Besides, he was about the only wire-perching birdie in the whole of St. Ives! (I think they generally prefer safer perches, where they won't be hassled by sea-gulls)

4. A group of tourists 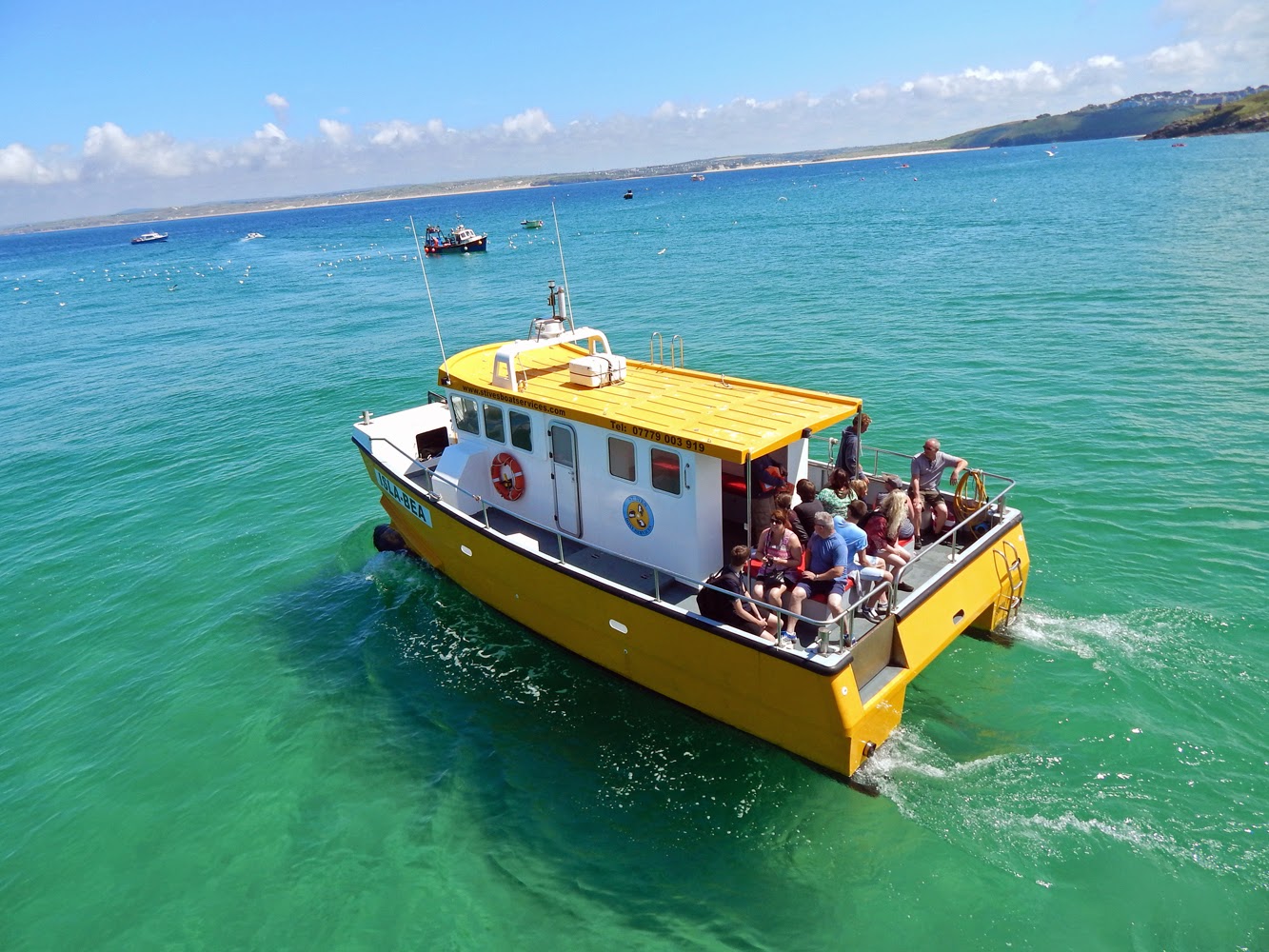 This is a boat that takes tourists along the Cornish coast, to see the seals which feed in the water at a nearby rocky island.  We had just returned from our own trip and I couldn't resist taking a snap of those who so eagerly took our place - complete with the ubiquitous English Tourist collection of sandwiches, sandals and raincoats! 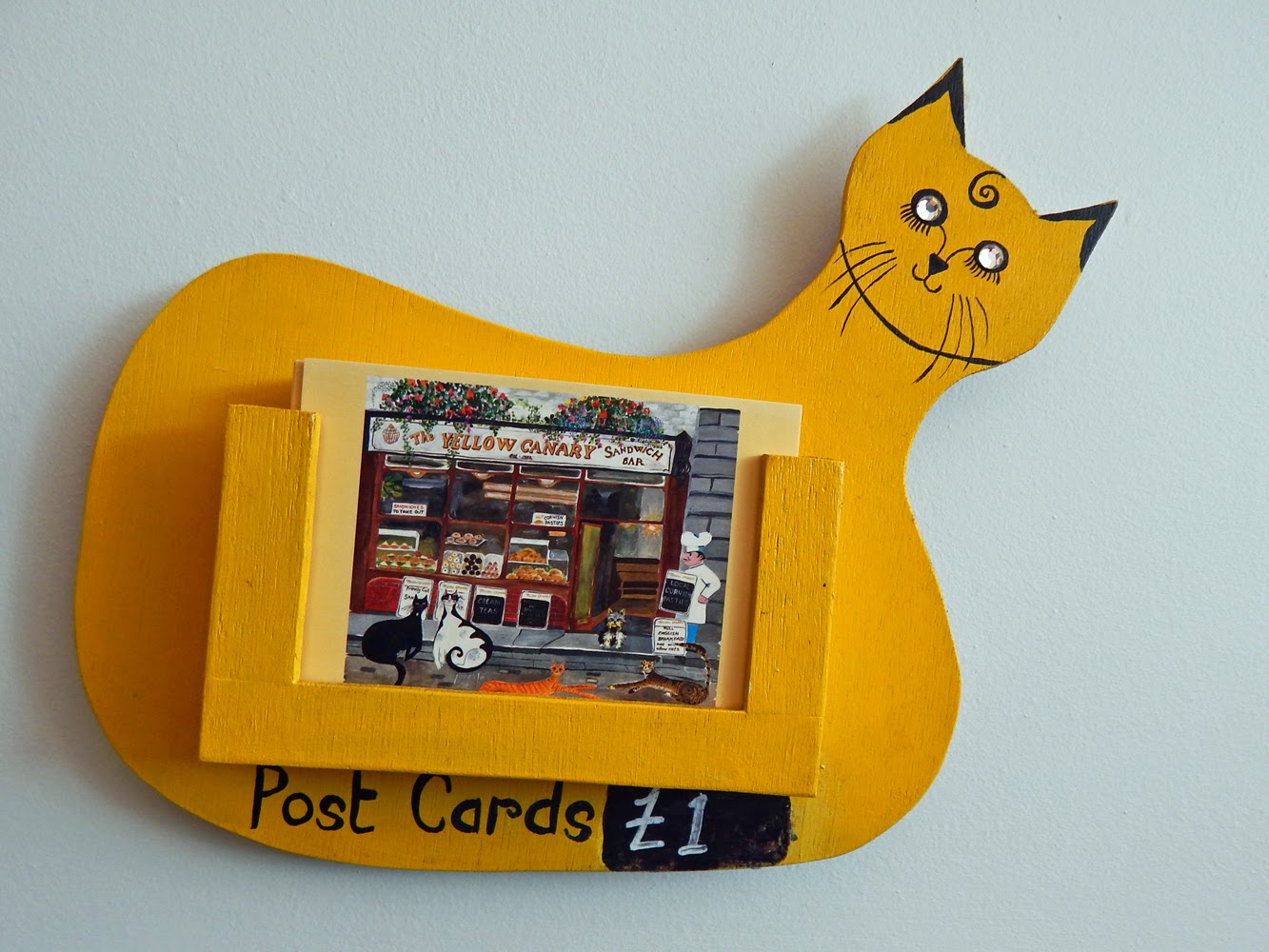 I did photograph a "proper" rack of traditional seaside holiday postcards... But then we went to the Yellow Canary Cafe in St. Ives.  They had two of these fabulous postcard holders, filled with cards depicting the cafe - and made specially by the painter of that picture, to display her work to its best advantage.  I couldn't resist! 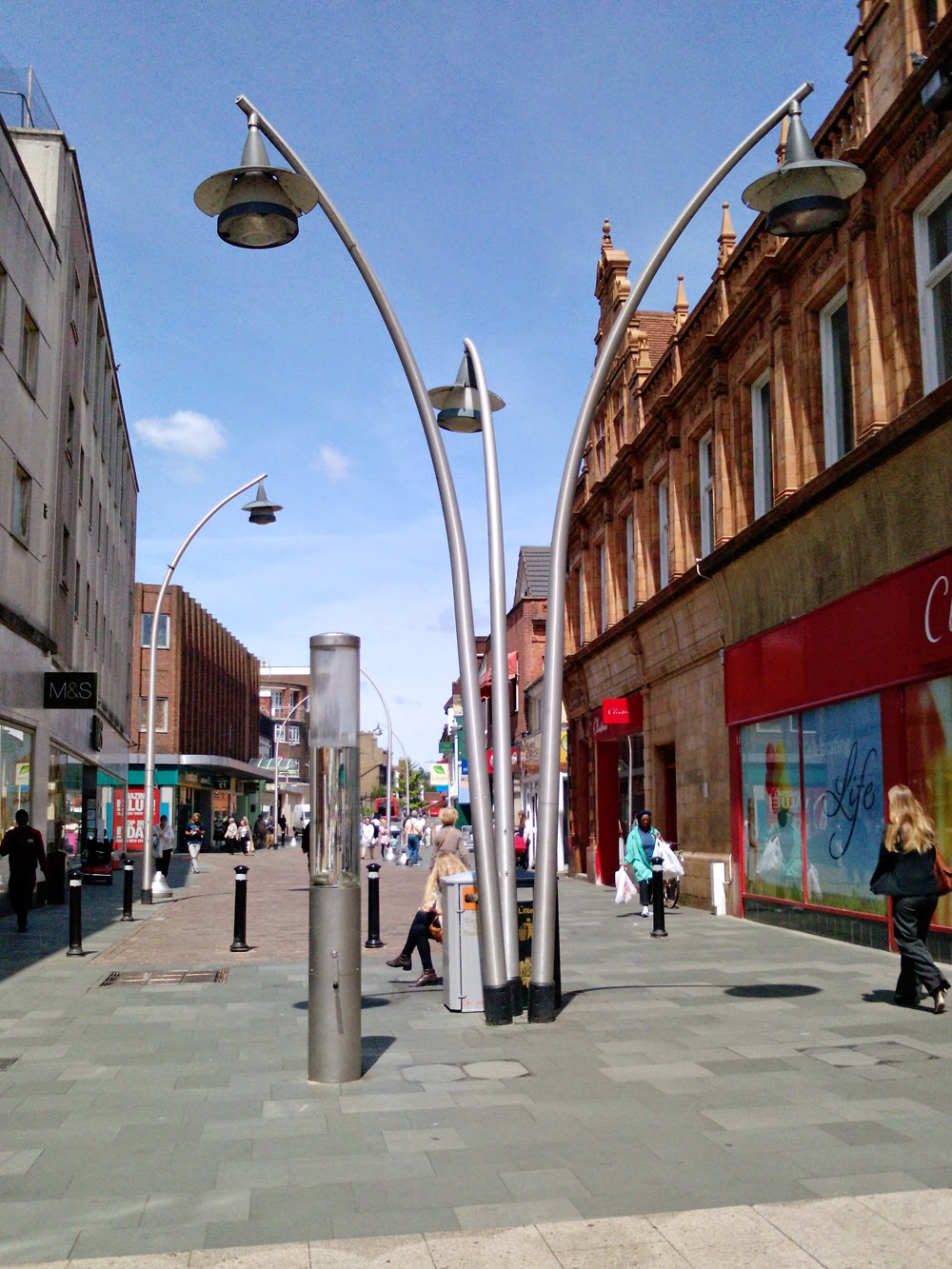 I suppose this could also qualify for Item #17 - that is quite some lamp post!  But I like this view of a street in our nearby town, so here you are - a shopping street in Bedford, UK. 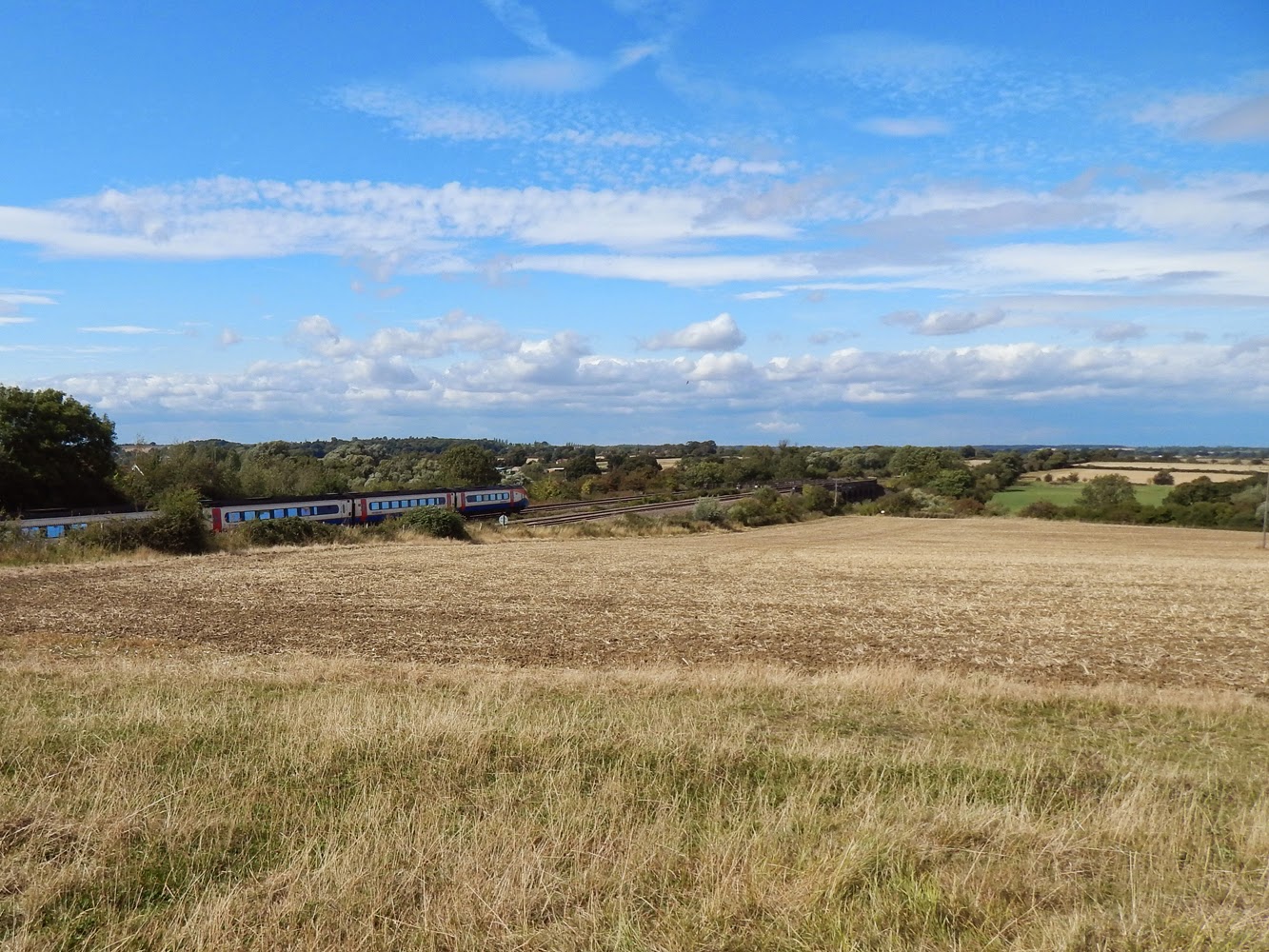 James and I had a lovely walk, out to the edge of our village and across the fields.  He showed me some places I had never explored before.  We live in an area where countryside is frequently interrupted by people-stuff. Like the railway, which runs South to London and beyond, as far as Brighton on the South coast or - as you see here - North to Leicester and on to Nottingham, Derby, Durham, Newcastle... all the way to Edinburgh in Scotland.  But the lovely viaduct, carrying the railway bridge across the River Great Ouse, just seems to add to the atmosphere of our rural landscape.  We can hear the trains on rainy days and they give a feeling of being near to Life, but sufficiently peaceful and remote, to feel that we "live in the countryside".
I like our village and the country round about. 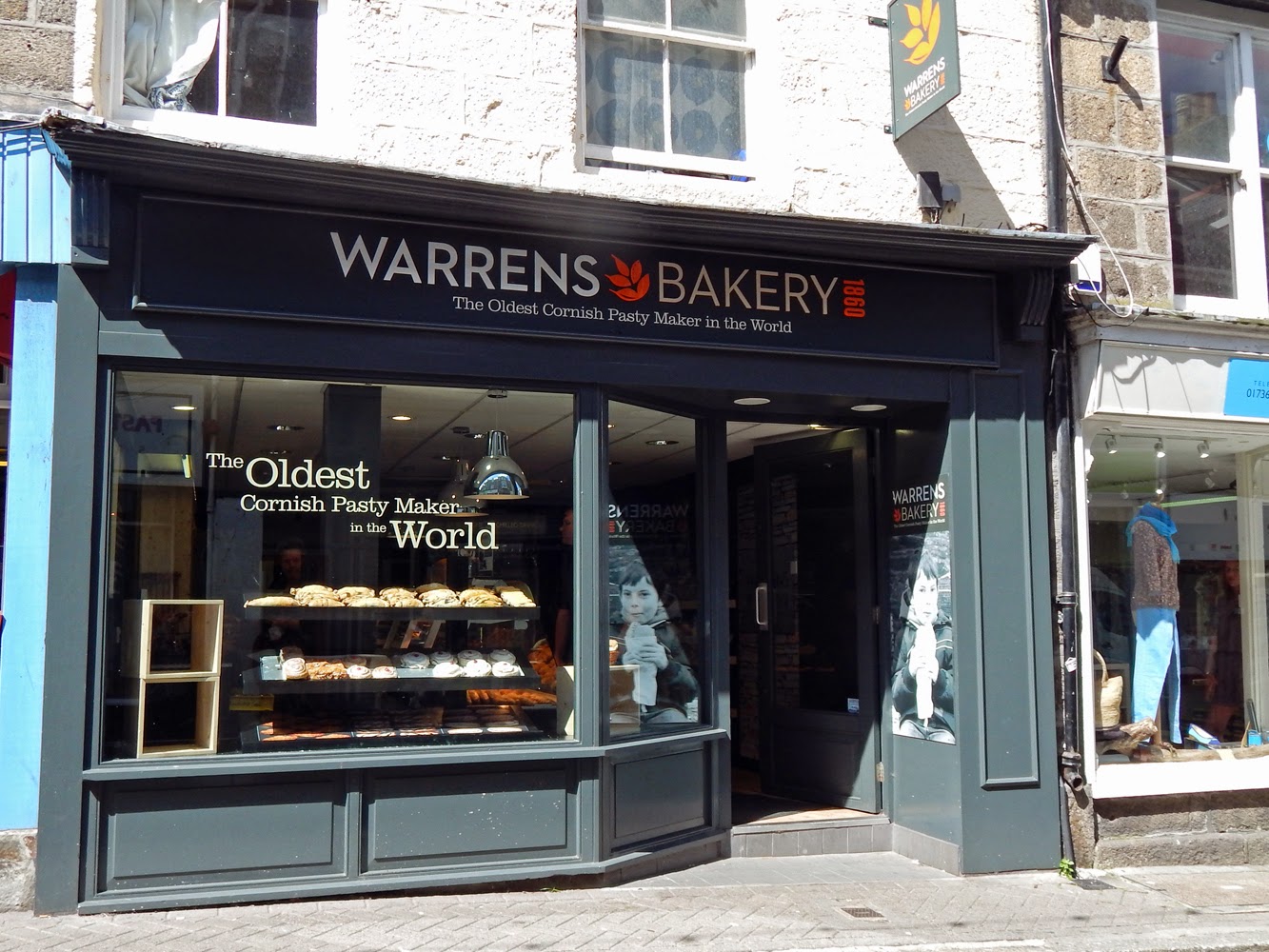 A real Cornish Bakery, claiming to be "The Oldest Cornish Pasty Maker in the World".  I'm not certain whether that applies to the Bakery itself, or to the Baker! Either way, the pasties were very good.

10. A photo bomb (someone found lurking in the background of photo; the lurker may have intended to disrupt the picture or may be doing it unintentionally, but the background lurker is a surprise to the photographer)
* It's a matter of chance - and the chance never occurred! 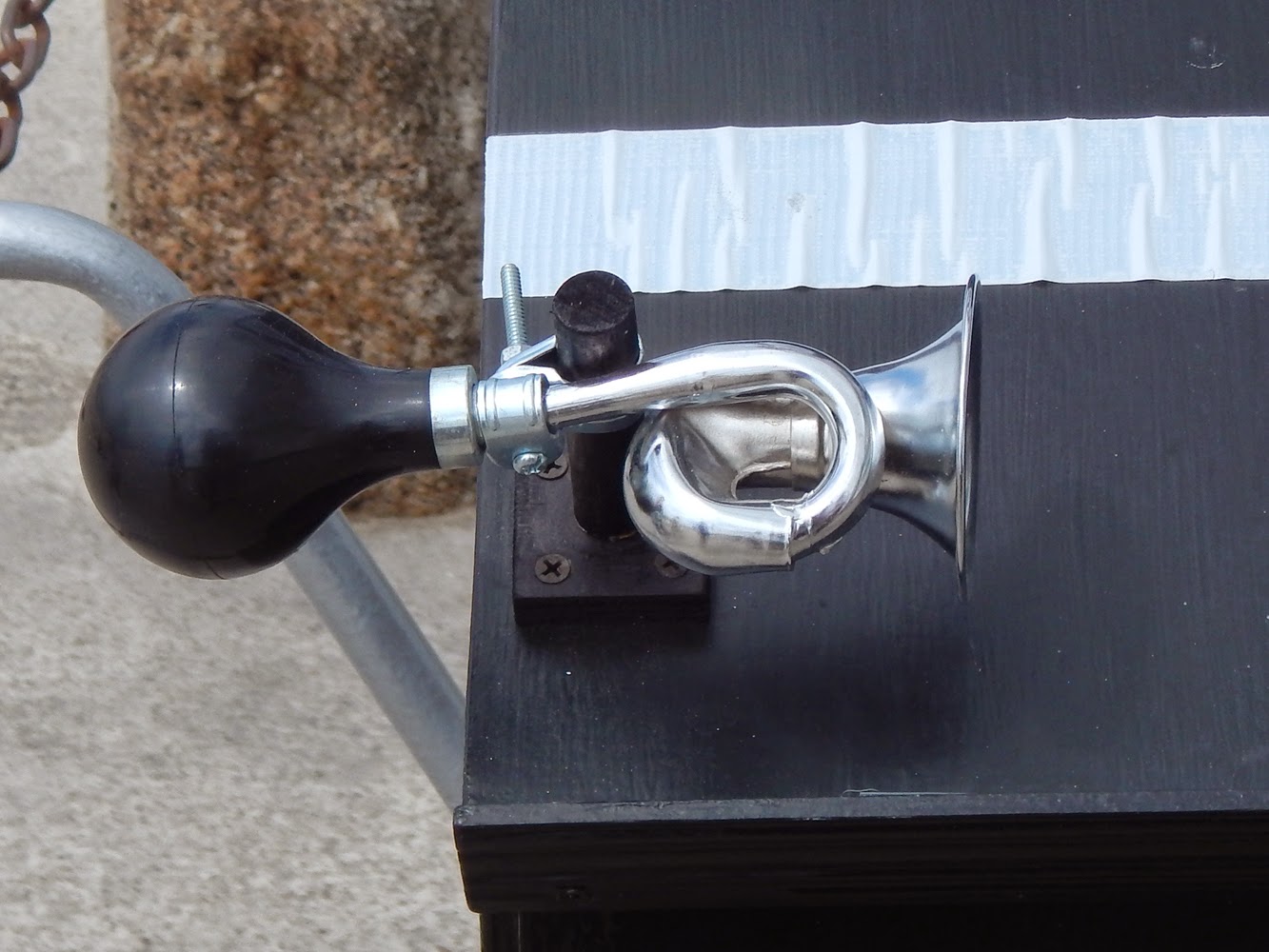 The pace of life "Doown yer i' Coarnwaall" is somewhat slower and more leisurely than at home in Bedfordshire.   The horn was attached to a small street barrow, owned by a local artist.  The stall was filled with postcards displaying his lovely illustrations of the surrounding town and countryside, which he offered for sale.  However, he didn't feel the need to hang around his stall, looking hopeful and guarding his goods.  He would wander off and buy a coffee, or a pasty, trusting his potential customers to notify him with a loud "Parp" on this horn, should they need his attention!

12. A mascot
*We went to Norfolk for a holiday - and arrived on the last day of the Carnival, when they had a parade. Unfortunately, we were held up in traffic and when we arrived at Wells, the traffic was all stopped - to wait for the parade to go through.  So, we didn't arrive until after the parade was over - and missed both the parade and all the exciting people in it.  So, no Mascot...  and I didn't see anything that would qualify anywhere else this summer! 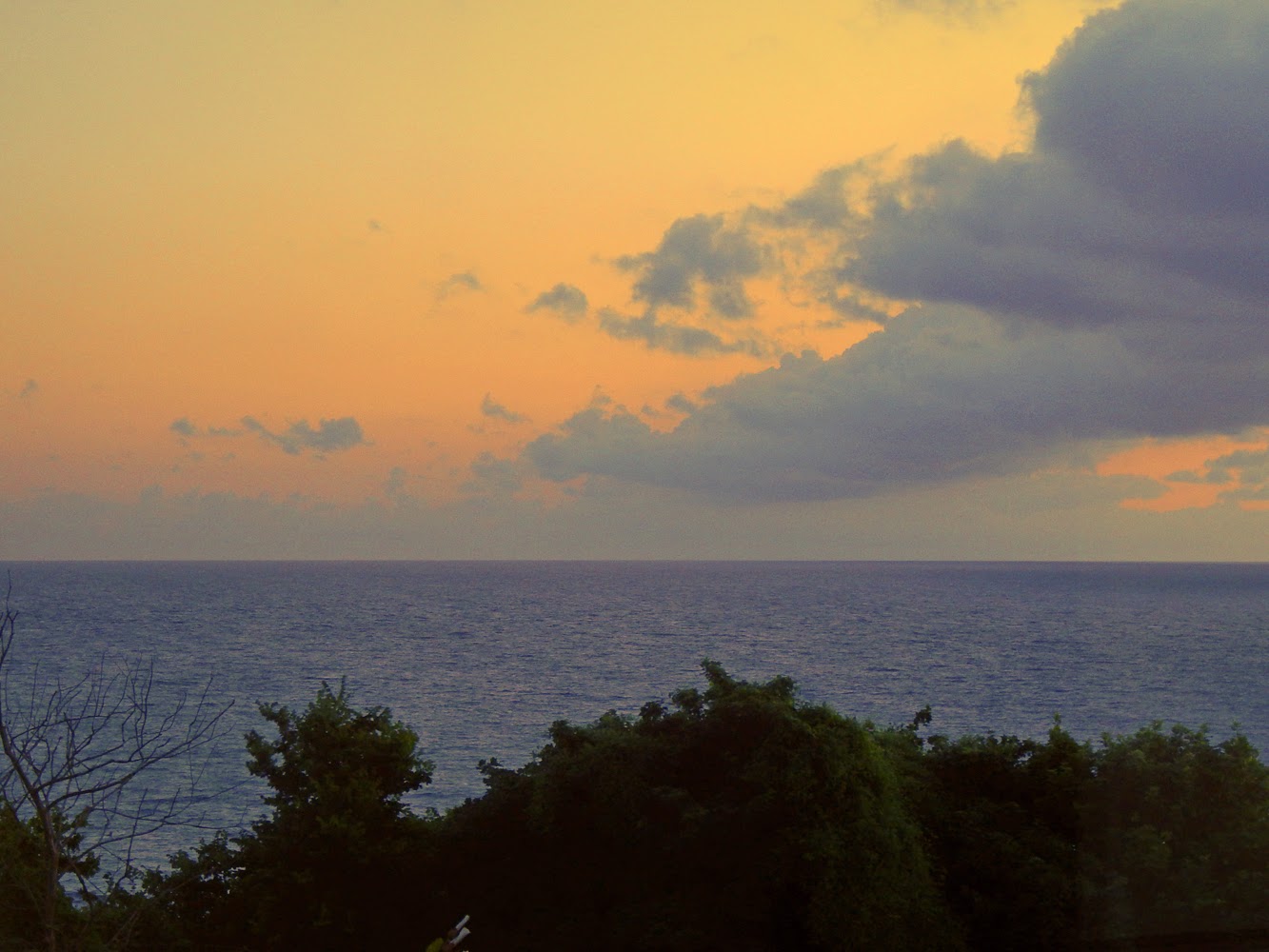 I got up Early on July 9th, to take this rather magical shot - the photo history says this was taken at 4:09am. So worth the effort - but I did go back to sleep for a couple more hours!


14. A parade
15. A juggler
* As mentioned before, we missed the Wells Carnival Parade by just a few minutes - our arrival coincided with the traffic being stopped for the parade to pass through the town.  We were stuck on the main road and missed it! 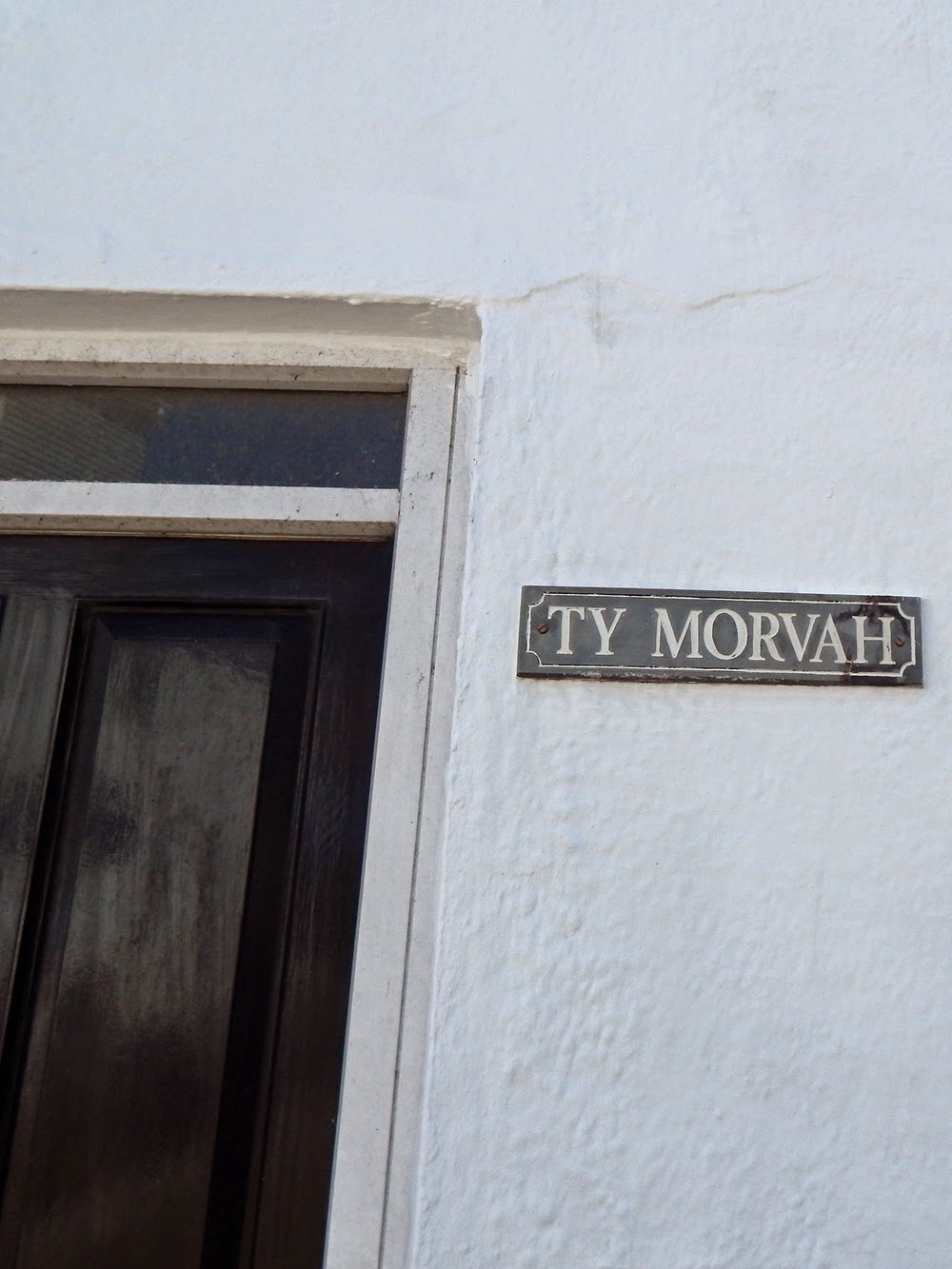 Well, we were "abroad" for our week away in July - we went all the way to Cornwall!  So, we were well placed to find a sign "in foreign"; so I thought... In fact, Cornish is still a near-dead language and although many are now trying to revive it, it's not used in the wide and regular way of Welsh in Wales.  There, we would have found many, many signs, notices, road signs etc, all in Welsh and English (if we were lucky!).
I had to hunt quite hard to find anything in Cornish.  This little house sign simply translates as "Morvah's House".  I don't know if the owner is called Morvah; I did a little research and found there is a village near St. Ives, called Morvah, which is named after a local early-Christian saint. 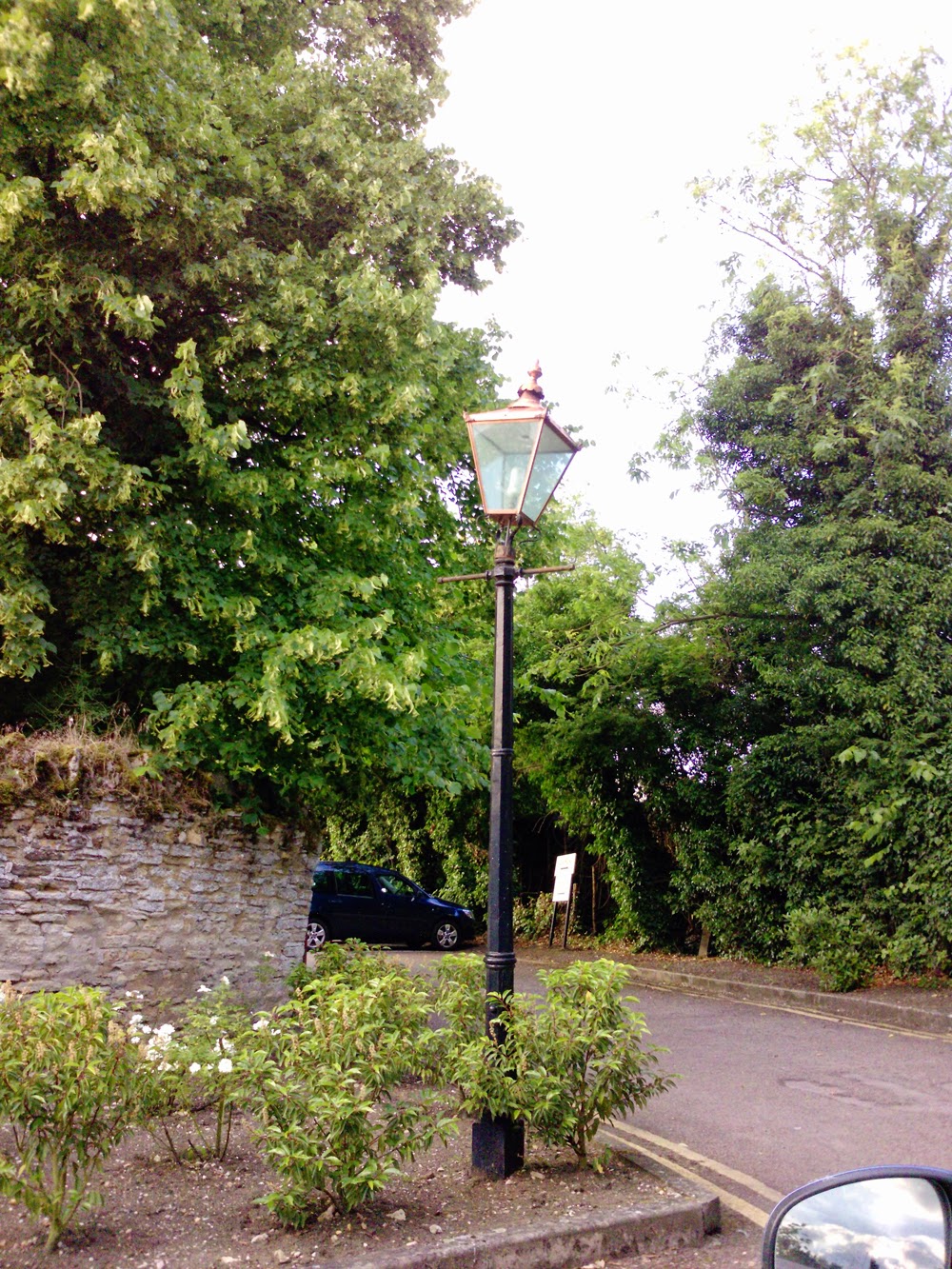 I found plenty of lovely lamp posts while I was on holiday.  However, in the end I have settled on this quirky little example.  It's in the garden behind our village pub.  I know it's a bit wonky, but I like it so much.  Its Edwardian appearance does rather remind me of Narnia.... 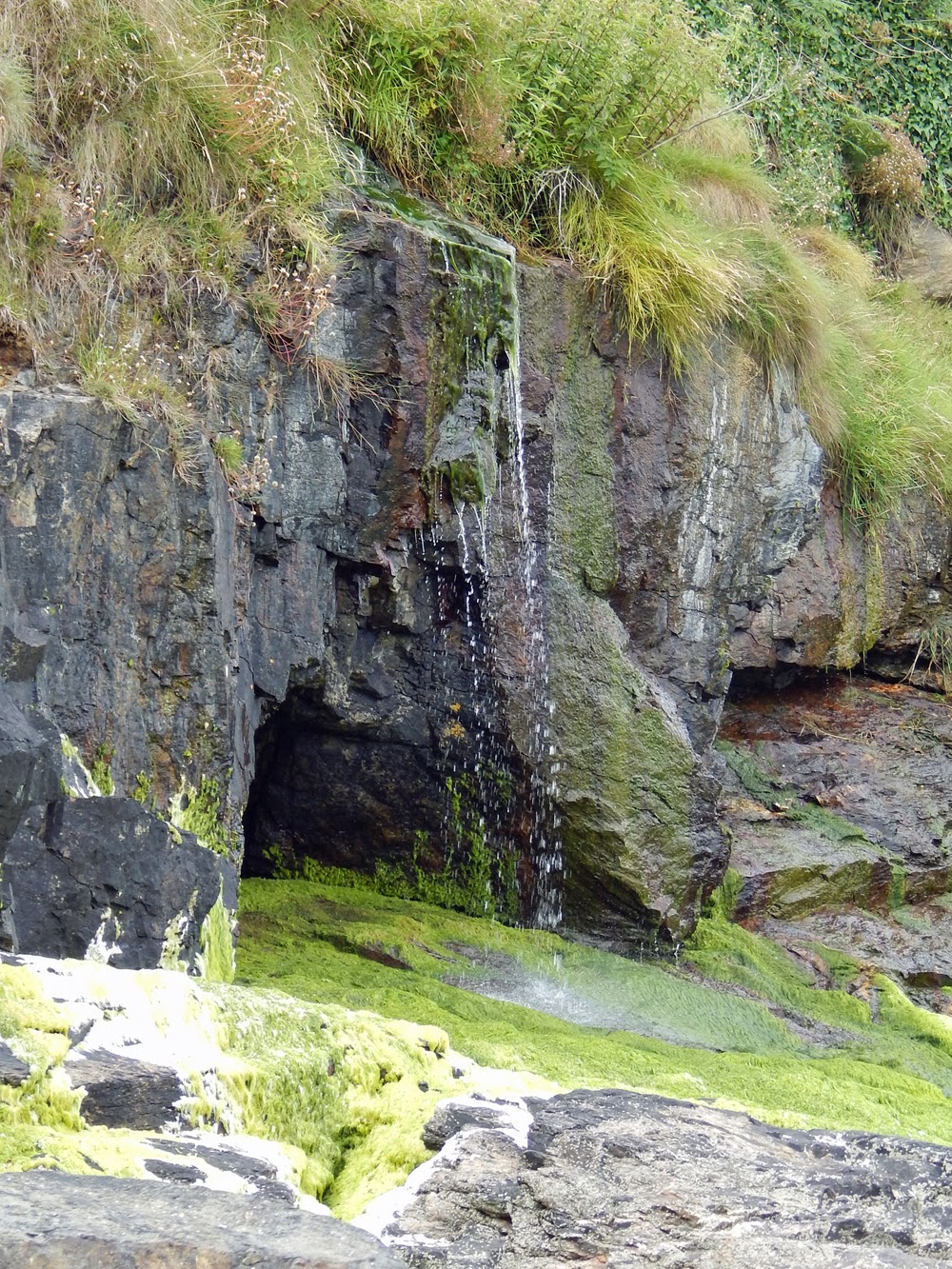 I live in Bedfordshire. It's pretty flat.  What we call "a hill", people from elsewhere in Britain would call "a small rise", or worse, "a mere pimple"!
So, it was lucky that we were on holiday in a land of cliffs and caves.  We found this little, trickly fall at the beach in Carbis Bay, where we were staying.  It was a good height - about twenty feet - and made a great splashing as it fell onto the seaweedy rock below.  In winter-time, I should imagine this would be something more like a torrent, as local winter rains swell the ground-water by several hundred percent.  So, this is a photo of a "resting" waterfall - waiting to be replenished by the seasons! 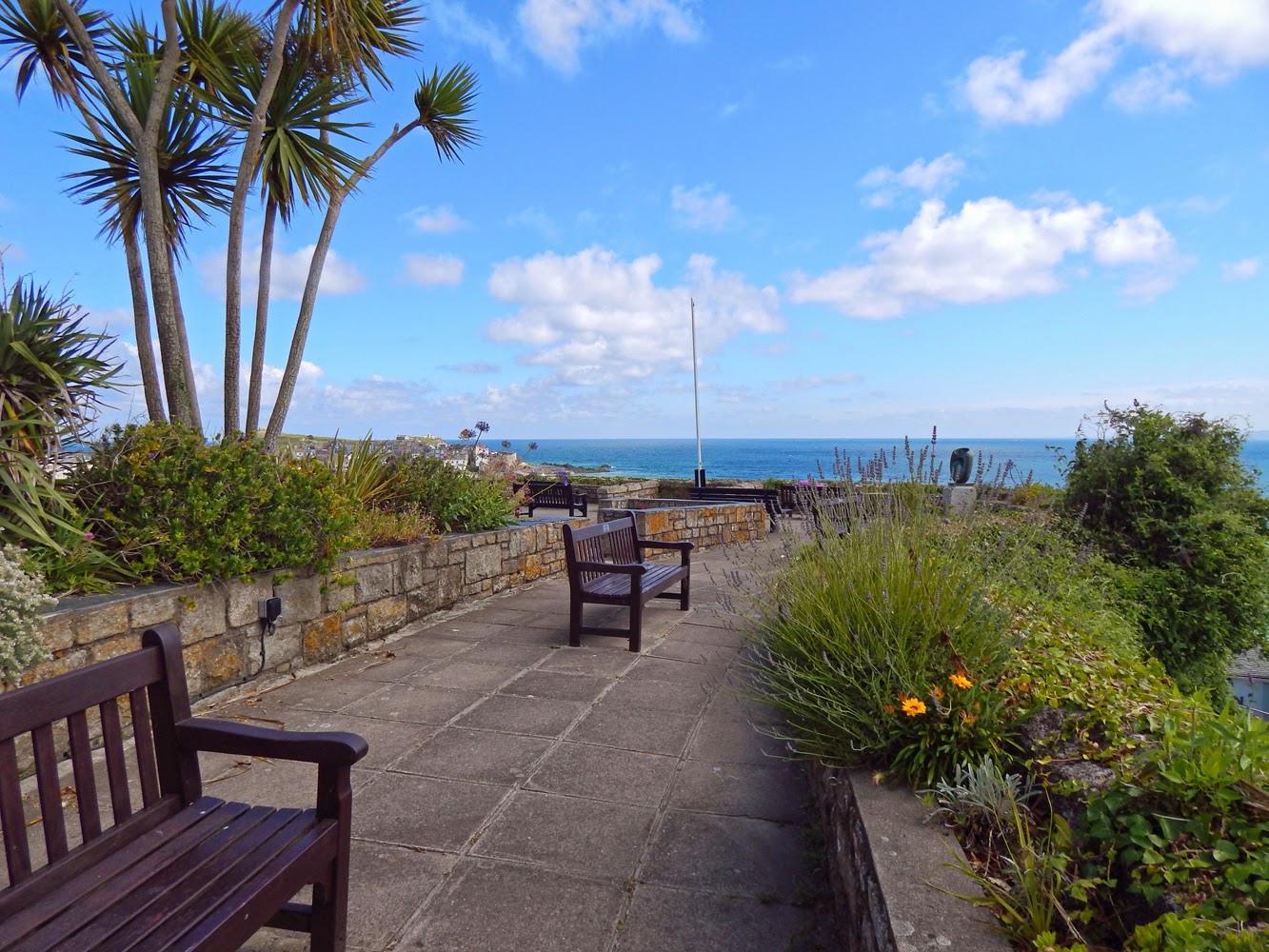 A Cornish Cliff-top Garden, St. Ives, Cornwall.
Such exotic planting could never survive our chilly, damp and miserable winters.  In Cornwall, the climate is generally far more temperate, so that they can grow plants that would otherwise be found only in the Mediterranean and further south.  Palm trees jostle with succulent desert-loving plants and exotic flowers.  A lovely place to sit and watch the boats go by.


20. A bus (not a car, truck, lorry, camper or RV) with a picture painted on its sides.
*No luck here.  Some of the large buses in town have painted pictures, but our local ones are smaller and they don't!
21. A photograph of you with something representing the season (recognizing that the season will be Winter for our friends in the southern hemisphere). Note: you may not use a substitute for this item.
* I don't believe that I don't have this photo! I have looked and looked, but it just didn't happen!

So, I got most of them... It was fun - in fact the whole family joined in this year and it was a joint effort!

Posted by Lizzie at 8:36 pm 8 comments: Links to this post